The Impact of Wheat By-Products on Horses

There is a marketing trend that declares a ration that is cereal grain free/whole soya free/Lucerne free, or free from another material that some people may perceive as a problem in equine nutrition. In some cases, a close inspection shows that a by-product of those materials is present. It is not intended to mislead, feeding soya hulls removes the allergenic globular protein of the seed and so can be regarded as a separate product, and cereal bran is assumed to be fibre, and so beneficial.

But this may not be the whole case; certainly, there are many different carbohydrates that make up plant fibre, and they can impact heavily on the microbial population and the ability of individual species to ferment it, and so influence the ratios of the volatile fatty acids (VFA) that make up the “slow release energy” portion of the diet. Another factor is, depending on the process to separate the bran from the grain, there can be quite a large component of the grain in the bran.

Flour milling, through a series of rollers removes wheat husks, with varying amounts of endosperm, and so starchy material. From bran through middlings to wheatfeed, the relative amounts of fibre and starch can vary enormously, and the actual terminology is becoming blurred so any of these can contain up to 30% starch. This has led to some definition of medium to high glycemic index for wheat bran (Rodiek & Stuhl, 2007).

Does this really matter? As long as the starch level in the final feed is less than 10%, or less than 1g/kg liveweight per meal (industry guidelines to offset various obesity related problems) there should be no problem, especially as the actual fibre has been regarded as beneficial, certainly to pigs and horses where its ability to hold water can offset constipation. But there are a number of caveats that should be discussed, relating to the make up of both the starch and the fibre. Carbohydrate make-up of plant sources is extremely complex, and the terms starch and fibre simplify this. Although starch is basically units of glucose linked together, and fibre are links of many carbohydrates, there are major differences between plant species that can have large impacts on nutrition.

Starch consists of straight chains of glucose (amylose) and highly branched chains (amylopectin). The ratio of amylose to amylopectin varies between sites and species. The ratio is characteristic of the site or species. A starch granule is made up of growth rings. Within the lamellae are amorphous bands of amylose, fatty acid free or fatty acid bound, and crystalline bands of amylopectin and amylose (Fig 1): 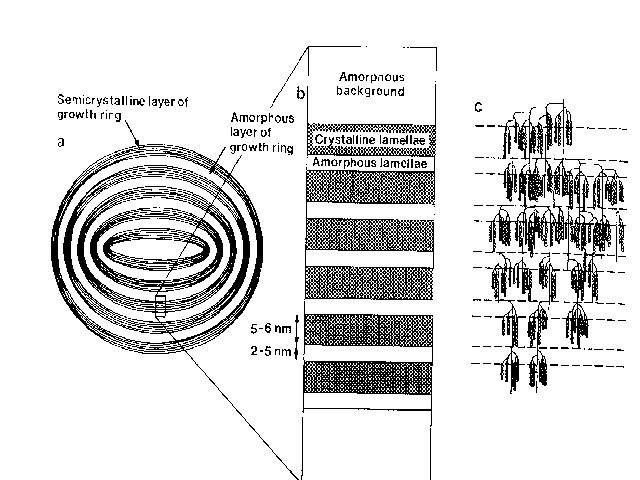 Fig 1. Diagram of starch rings within a granule showing growth rings (a,b) and amylopectin structure (c). The ratio of amylose to amylopectin, the amorphous layer and the arrangement of the growth rings all affect the digestibility of the starch.

Starch digestibility depends on the ability of the animal’s enzymes to penetrate the granule. Due to its structure the starch can be divided into rapidly digested (RDS), slowly digested (SDS) and residual starch (RS). As the names imply there is a time effect for the first two, whilst RS is unlikely to be enzymatically digested although it can be fermented by certain gut microbes. For an animal with limited amylase production, such as the horse, both SDS & RS will enter the hindgut, and there is every chance that RDS will if in sufficient quantities. Although it is now well known that processing (micronization, extrusion, cooking) can improve overall starch digestibility, bran by-products come from rolling which has little impact on the granular structure:

The implication that, even if wheat bran/middlings supplies low amounts of starch in a hard feed, a large proportion of that starch will enter the hindgut; subsequent disruption is well documented.

Wheat starch, specifically sourced from wheat middlings , was shown to affect microbial populations of the hindgut. Feeding at a level to supply 1g of starch per kg bodyweight, middlings increased lactobacilli, gram positive cocci and other amylolytic bacteria, whilst depressing cellulytic (Harlow et al., 2016). Concentrating just on the starch source – from a variety of cereals – these observations appeared indicative of the starch, rather than fibre faction (Harlow et al,. 2015)

As mentioned above fibre content varies with source. Fibre is a generic term where sugar carbohydrates are presented chains by a slightly different link. These “β” links cannot be digested by animal enzymes, only by some microbes. Those living in the hindgut of horses can ferment these carbohydrates releasing short chain fatty acids that are absorbed for energy. There are about 6 sugars that contribute to the majority of structural fibre; glucose is the basis of cellulose whilst the others contribute to the hemicellulytic portion of fibre.

Wheat fibre has a low proportion of soluble fibre (<5%), non-structural arabino-xylans, whilst insoluble arabino-xylans form the hemicellulytic portion (Knudsen, 1997). Whilst it has similar gas production volumes to other fibre sources (soya hulls, oat hay, alfalfa hay) in vitro, it does tend to have a lower pH (Elghandour et al., 2016), whilst generating similar microbial protein. This was also shown by Harlow et al. (2016), where faecal pH was significantly reduced by incorporating wheat middlings into the diet. Alongside the increase in lactobacilli with a concomitant stasis in lactate producing bacteria, the incorporation of wheat middlings will generate lactic acid production in the hindgut which can lead to microbial disruption. Furthermore, the fibre profile of wheat bran indicates a relatively high proportion of hemicellulose and low cellulose (Fig 2.). As cellulose fermentation in the horse generates, almost exclusively, acetate – only traces of propionate and butyrate – (Sunvold et al., 1997) it would appear that a low cellulose product would benefit the VFA pattern in favour of the latter two VFA. As propionate is the most energy rich VFA and butyrate has a role in maintaining hindgut condition and health, wheat bran fibre would seem advantageous. 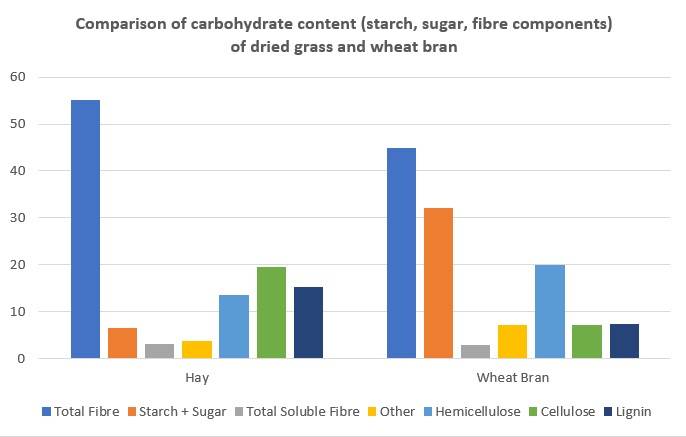 However, there has been some research on the blood parameters associated with wheat bran. Although not in horses, the use of the rat as a model does have its applications. Despite different species having different fermentation rates, patterns etc. there are common trends. Data from Liu et al. (2014) showed hindgut fermentation of wheat bran fibre does improve butyrate fermentation with a reduction of acetate in rats, which is what would be expected for the horse. Additionally, blood parameters indicated that there was an increase in lactate, as well as iso-butyrate, and a reduction in amino acids and glucose. This suggests a possible metabolic shift. Although data is incomplete (although repeatable in rat work), it may be necessary to investigate a potential for increased anaerobic energy activity and reduced protein synthesis, as these both have implications in the horse.

It may be disingenuous to declare a product to be free from cereal grain and then introduce a fibre source that has high levels of starch. The starch source itself, not being processed has a low level of digestibility and is very likely fermented in the hindgut with negative effects on pH, microbial populations and VFA/Lactate production, even if fed at the acceptable level of 1g starch/kg body weight. Although the fibre itself may generate a better ratio of VFA, data in rats suggest wheat bran fibre could have more negative impacts than other fibre sources.