Allergies are a range of conditions that can affect the skin, lungs and gut. They are distinguished by being immune-mediated reactions following food intake. This is different from food intolerance that is non-immune mediated. Food allergens are (glyco-)proteins with a molecular weight from 10–70 kDa and are resistant to treatment with heat, acid, and proteases (Verlinden et al, 2006). They exert their effect by impairing the mucosal barrier and reducing oral tolerance, and are mediated through types I, III & IV hypersensitivities. These are either IgE mediated (immediate or intermediate hypersensitivity – Anaphylaxis) or non-mediated (delayed hypersensitivity). Allergens leads to a T helper (Th-2) adaptive immunity reaction (Kang et al., 2017), stimulates the release of interleukins and the generation of IgE antibodies; in the case of non-mediated, T-cells may be involved and the invocation of other immunoglobulins, such as IgA, IgG and IgM (Pali-Scholl et al., 2017).

Oral tolerance and the mucosal barrier are compromised in the case of allergies. As an antigen ends up in the lumen of the intestine, it is generally recognized by dendritic cells (DC) present in Peyer’s patches, after the antigen has been transported into the Peyer’s patch via specialized intestinal epithelial cells (IEC) known as M cells. The DC migrate to lymph nodes and activate T cells, which migrate back toward the intestinal lamina propria to carry out their effector functions (Kivit et al., 2014). Generally, Treg cells suppress adaptive immune responses through cell–cell contact dependent mechanisms or secretion of the anti-inflammatory cytokines IL-10 or TGF-b. Induction of Treg cells results in abrogation of food hypersensitivity responses. Within IEC are specialised regions that express toll-like receptors (TLR), a range of which recognises antigens from both oral and microbiotica origins and stimulate inflammatory responses. It has been shown that some TLR appear to recognise food antigens and demonstrate a link between food allergy and gut microbiotica; microbial stimulation polarizes the immune response toward Th1, while lack of microbial stimulation maintains aTh2 polarized immune response.

At the same time, a number of dietary metabolites also influence inflammation via a diverse family of ‘metabolite-sensing’ G protein-3 coupled receptors (GPCRs). In particular, fatty acids are agonists of GPCRs. Although they can vary in chain length, short chain fatty acids are of particular importance as they are fermentation end products of some gut bacteria within the microbiome (McKenzie et al., 2017). The volatile fatty acids (VFA) – acetic, propionic and butyric – bind with known GPCRs and have a fundamental role in gut homeostasis, and inflammatory mediation.

The microbiome of mammalian species can be categorised into 6 major phyla - Firmicutes, Proteobacteria, Bacteroidetes, Spirochaetes, Fusobacteria and Actinobacteria, and a number of minor phyla (Tizard & Jones, 2018) – but the bacterial numbers and diversity tend to increase along the length of the GIT. In the dog the proportions between the groups change along its length (Figure 1 – Schmitz & Suchodolski, 2016).): 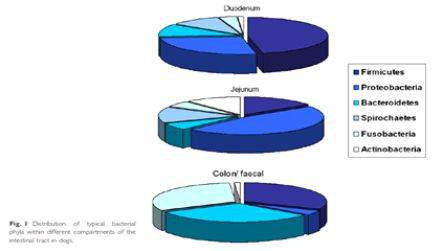 The canine stomach has a microbiome dominated by Helicobacter spp. Bacterial counts in the canine duodenum are in a range from 102 to 109 per gram of content In the colon, the count ranges from 109 to 1011 colony forming units per gram. The predominant intestinal phyla include the Firmicutes (48%), Bacteroidetes (12%), Proteobacteria (23%), Fusobacteria (17%), and Actinobacteria (1%). Clostridiales (firmicutes) predominate in the duodenum and jejunum. Fusobacteriales and Bacteroidetes   abundant in the ileum and colon. Bacteroides are critical in the role of the microbiome as they are gram negative bacteria that can ferment indigestible plant carbohydrates – fibre. The breakdown of fibre into the major VFA and their relative proportions is dependant on the spectrum of the bacteroides, and dominance of specific genera; at the same time other groups – such as the Closridiales – exert negative effects, and reductions in their populations are desirable. Although food allergy has been associated with a reduced diversity of species, expanding species within Bacteroides is now accepted as the way forward. A healthy gut microbiota composition is high in Bacteroides spp., Lactobacillus spp., and Bifidobacterium spp. In particular, Bacteroides fragilis supports Th1 and Treg polarization in a TLR2-dependent manner through recognition of polysaccharide A by gut DC. Genomic DNA of Bifidobacterium spp. and Lactobacillus spp. –rich in unmethylated CpG motifs –potentially interact with TLR2 and/or TLR9 to enhance the intestinal epithelial barrier function and to support Treg conversion via CD103C DC. Furthermore, apical TLR9 activation by IEC suppresses NF-kB activation .In food allergy , the microbiota composition shifts toward a higher frequency in Proteobacteria spp., Clostridium spp., and Enterobacteriaceae. This may favour TLR4 mediated barrier disruption facilitating allergen translocation in the gut mucosa and pro-inflammatory cytokine production in a NF-kB-dependent fashion, sustaining an allergic inflammation. Specific non-digestible oligosaccharides(prebiotics) support the growth of Bifidobacterium spp. and Lactobacillus spp. And suppresses the growth of Clostridium spp. and Enterobacteriaceae, which may contribute to induction of tolerance toward allergens in the intestines (de Kivit et al., 2014).

Returning to the VFA, butyrate has a special role in maintaining tight junction function. It is also known to serve as a direct energy source for the colonic epithelium and to possess anti-inflammatory properties resulting from inhibition of the activity of the transcription factor NF-κB (Chen et al., 2016).

Therefore prebiotics that encourage Bacteroides – and some Clostridia that can generate large amounts of butyric acid from non fibre sources, can help maintain a favourable microbiome and lead to the amelioration of allergic responses. From a review of allergenic foods in the dog, although dairy was high on the list, the most prevalent was meat – especially beef – thereafter wheat, egg, soya & fish; avoiding allergenic foods does not appear to be an option. A similar profile was seen in cats (Verlinden et al, 2006).

Significantly, combinations of galacto- and fructo- oligosaccharides (GOS & FOS) have been shown to reduce allergies in several studied species (Arslanogu et al, 2008; van Hoffen et al., 2009). Finally, β-glucans has been shown to have many immunological support functions, from macrophage stimulation to prebiotic activity. They can help reduce inflammatory cues via the MALT process (mucosal associated lymphoidal tissue) and they can directly improve bifidobacter populations (see Knowledge Base).

Oral induced allergies (there are airwave, skin, urino-genital varieties but usually activated by oral), therefore, are the bodies mistaking food proteins for microbial, pathogenic markers. Modification through the use of prebiotics can help redress the situation (Figure 2): 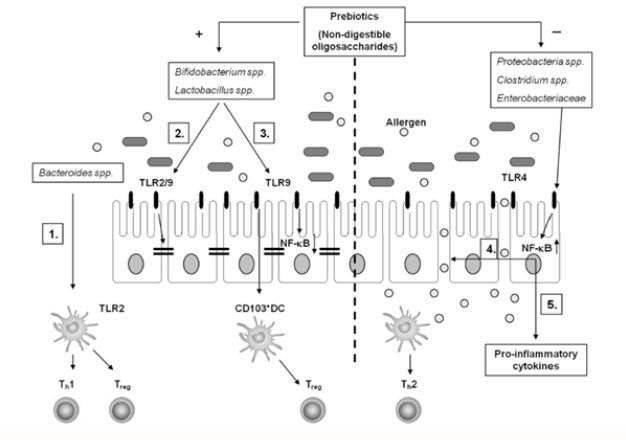