The Benefits of Hemp Oil vs Linseed Oil

There has been much written about the benefits of Omega fatty acids, in particular ω-3 and ω-6. These have been labelled anti-inflammatory and pro-inflammatory as well as heart healthy; they also have roles in bone metabolism and other aspects of metabolism, including immune and allergenic responses.

There is an impression that ω-3 is the main essential fatty acid, followed by ω-6 and then the lesser promoted ω-7 (ω-9 is synthesised from saturated fat in the body and so is not an essential dietary ingredient). Logic then dictates that an oil supplying the most ω-3 is preferable in animal nutrition. If this is the case Linseed (Flax oil) appears the front runner – see Table 1. 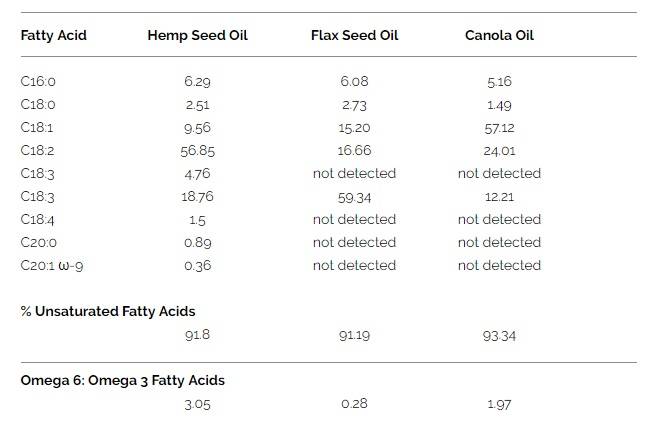 However, it is generally accepted that n ω-6:ω-3 ratio of 3-4:1 is ideal for most physiological systems. The nomenclature and properties of omega fatty acids have been described in an earlier article (Omega Oils – What do they really mean?) but, in summary, there are two main descriptions:

This means, for example, that C18:2 ω-6 is a 18 carbon chain fatty acid with two double bonds; the first being at the 6th carbon, the second, although not itemised is, generally at the 9th carbon atom. There are variations of this system and, for plant fatty acids, the most important variant occurs in the C18:3 fatty acid, linolenic acid.

As the Omega Oils article explained, there is an almost antagonistic role between the two essential omega acids. They both have pathways that lead to a family of metabolites called the Eicosanoids that have a pivotal role in factors as diverse as inflammation, bone metabolism, cell membrane function – especially cardiac and vascular – and oxidation. The Eicosanoids are synthesised from various sources but two major routes are from C20 fatty acids, Eicosapentaenoic acid (C20:5 ω-3) and Arachidonic acid (C20:4 ω-6). They are metabolic signallers, hormone like substances, such as Insulin-like Growth Factor (IGF) and prostaglandins (PGE1, PGE2).

Although interesting in itself, these attributes do not necessarily indicate whether one source of oil is better than another; over and above the ratio of ω-6:ω-3. Based purely on this parameter it would appear that linseed oil has a paucity of ω-6, and this could impact on some catabolic processes such as bone resorption (PGE2) as well as vascular cell membrane function.

However, feeding linseed oil has been shown to have varying degrees of impact on anti-inflammatory processes. ω-3 reduces inflammatory mediator synthesis (thromboxane 2, TNF-α), which appears to have positive effects on conditions such as sweet itch; thromboxane 2 itself is a direct derivative of arachidonic metabolism.

Inclusion of hemp oil in GWF Nutrition products has benefits over and above the Oatinol delivery system. Whilst it would seem beneficial to include an oil with higher ω-3 levels than hemp oil in products that are designed to help support immune and anti-inflammatory function, there are two unique properties of hemp oil within vegetable oils. First is the presence of stearidonic acid (C18:4 ω-3 - SDA), and secondly the presence of ϒ-linolenic acid. Although a ω-6 acid, and a precursor of arachidonic acid, ϒ-linolenic acid has some unique properties.

Stearidonic acid is derived from α-linolenic acid, and is a step in the conversion to eicosapentaenoic acid (EPA) and docosahexaenoic acid (DHA). In this sequence the generation of stearidonic is rate determining, while the conversion of stearidonic to EPA is the one of the most efficient steps. As such, the metabolism of stearidonic acid can help improve the preceding rate determining step. In vegetable oils, SDA is found in enriched oils (GM modified soya and canola), but only naturally in hemp. SDA has been shown to improve the EPA status in some species.

The conversion of linoleic to linolenic acid by mammalian metabolism is a complex series of biochemical reactions and can be rate limiting (i.e slow). Subsequent conversion to C20 and C22 fatty acids is through adding pairs of carbon atoms and is not rate limiting. That is, the supply of ϒ-linolenic acid through the diet will be an efficient system to deliver arachidonic acid. Secondly, there is some evidence that plant derived (therefore dietary) ϒ-linoleic acid, is an isomer of the mammalian synthesised version and can subsequently be metabolised to the prostaglandin PGE1 and thromboxane 1. These are anti-inflammatories, reducing the pro-inflammatory characteristics of the -2 variants.

Therefore, the presence of SDA and ϒ-linolenic both help promote generation of C20 fatty acids; that are the precursors of the eicosanoids that are so important in the control of metabolic processes, and so give a value over and above its numerical value.

So, hemp oil, although it has a lower level of ω-3 than linseed, and a higher ω-6, has significant anti-inflammatory properties. It’s available ϒ-linolenic ω-6 will help maintain vascular integrity and, through the -1 variants reduce bone resorption. As such it can be regarded as a beneficial alternative to linseed oil. Canola oil – possibly the next most popular in equine nutrition – also loses out to hemp oil as the majority of its unsaturated acids are ω-9.

Whilst the plant sterols have a role in cholesterol and LDL transport, ϒ-tocopherol is a powerful antioxidant and will help maintain cellular integrity. There are similar levels of some of these phytochemicals in linseed oil but β-sitosterol is 3x greater and ϒ-tocopherol is 4x greater in hempseed oil.

As well as having LDL transport properties sitosterol is also involved in reducing oxidative and inflammatory biomarkers and has been shown to modulate the development of atherosclerosis.

On a purely physical level these components, with the tocopherols, reduce oxidation of the fats. ϒ-3 oils are particularly prone to oxidation that leads to rancidity. Linseed oil stability has always been a problem, but hemp oil enjoys more stability.

In summary, Hemp oil has a balanced proportion of essential omega fatty acids, with the added benefit of the separate anti-inflammatory process of the C18:3 ω-6 faction to complement that of the inherent C18:3 ω-3. High levels of β-sitosterol support this process, help promote antioxidation and works alongside ϒ-tocopherol to promote anti-oxidative processes. Oxidation is a term that covers a series of metabolic factors, all of which can be destructive. Whether it is the action of free radicals or the enzymatic generation of auto-oxidation, anti-oxidation is a key process to ensure cellular integrity.

Although linseed oil may have a higher level of ω-3 fatty acids, the balance of 6:3, the presence of C18:3 ω-6 and the high proportion of anti-oxidative/anti-inflammatory agents makes hemp oil a more effective source of essential fatty acids.

There are other aspects of hemp oil; the role of its polar lipid faction in digestion and absorption is discussed in the Oatinol Delivery System on these pages, and this also benefits the bioavailability of the oil.