There are many joint supplements on the market, for both humans and companion animals. Products designed for helping maintain the joints are probably the single most popular supplement although they are used for a variety of reasons; from easing stiffness up to “treating” osteoarthritis.

So, what are they? And why do they seem to be a positive combination?

The first point to make is that the role of these two compounds impact directly on the maintenance of cartilage. Cartilage is an elastic tissue that covers and protects the ends of long bones at the joints, and is a structural component of the rib cage, the ear, the nose, the bronchial tubes, the intervertebral discs, and many other body components. It consists of collagen, elastin and proteoglycan that are produced from the chrondrocytes. At the region of the joints, articular cartilage covers the ends of the long bones within the protective and lubricating synovial area:

Figure 1: Joint Structure. (Mevel et al, 2014)
Around the chrondrocytes, there is a complex of type II collagen fibres in a matrix of aggregating proteoglycans, a component of which is chondroitin sulphate (Figure 2). It is also worth noting that other, similar compounds (glycosaminoglycans – GAG) such as hyaluronan and keraten sulphate are structurally linked with the proteoglycans. 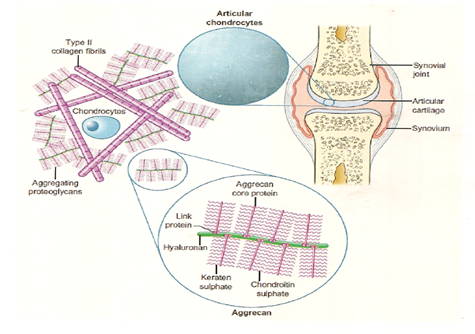 Glucosamine is a combination of a sugar (glucose) and amine – a nitrogenous derivative of protein. As such it has roles in both energy and protein metabolism; especially in its interaction with cartilaginous material, which is essentially a protein/carbohydrate complex. Chondroitin is a glycosaminoglycan (GAG), which repeats itself in a chain of alternating galactosamine and uronic acid, which lends elasticity to the cartilage matrix, whilst hyaluronan (or hyaluronic acid) again being a repeat of glycosamine & uronic acid, has a similar effect, as does keraten sulphate. All these compounds build and maintain structural cartilage.

There are two concurrent theories of the role of chondroitin and glucosamine in cartilage metabolism, Precursor Supply Theory (PST) and mediation against degradative processes.

From Figure 2, it is apparent that chondroitin does have a structural element, being a component of the proteoglycans; its presence also stimulates the production of GAG and collagen synthesis (Beale, 2004).

One of the driving forces in metabolism is a build-up of individual components. Metabolic pathways depend on reversible biochemical reactions; that is for example, chondroitin can be incorporated into proteoglycans and released from it. Where there is a build-up of chondroitin the reaction will be driven towards proteoglycans synthesis, but if there is a deficit, then proteoglycans will breakdown to release chondroitin. These interactions allow targeted use of GAG. Excess of one GAG will have a sparing effect of another allowing optimisation of the cross-linked structures within cartilage.

There is also evidence that a combination of glucosamine and chondroitin has a complementary and synergistic effect (Verbrugghe, 2013), probably due to the production of GAG through similar but separate mechanisms; whilst chondroitin additionally has a direct inclusion into proteoglycans. They are also believed to stimulate the production of chondrocytes, which positively affects the matrix of the collagen (Clarke, 1991).

However, GAG have more indirect roles in maintaining joint integrity (Eleoterio et al, 2015). These substances have anti-inflammatory action as well as combatting the effect of cartilage degenerative enzymes that disassociate collagen and proteoglycans.

In terms of the anti-inflammatory effect, glucosamine inhibits inflammatory mediators such as NOX, MMP and PGE2; chondroitin has less well documented effects on these mediators but has been shown to inhibit interleukin 1 release. The intermediaries include the family of cytokines that have initially pro-inflammatory (as a response to “ring fence” damaged tissue) and subsequently anti-inflammatory properties as part of the natural cycle of healing. However, in chronic (long term) cartilage degeneration the cycle gets stuck in the pro-inflammatory phase if there are insufficient specialist nutrients to help combat the system.

Finally, both glucosamine and chondroitin inhibit degenerative enzyme production; whilst the chondrocytes of many types of cartilage appear to be able to synthesis sufficient glucosamine, those in the cartilage of long bone joints have limited capability, especially those susceptible to osteoarthritis (Beale, 2004). This would explain why a relatively common nutrient, easily synthesised, requires supplementation. It is not the amount in the body but where it is synthesised.

As the blood supply to cartilage is severely limited the chondrocytes receive nutrient by passive diffusion. Whilst this is a perfectly efficient system for obtaining the building blocks glucosamine and chondroitin, it means that only “on-site” synthesis can occur – a surplus of glucosamine in the ear, for example, will generate GAG but this will not transport to the joints. Essentially, if joint cartilage is compromised and cannot regenerate itself, it will require nutritional supplements.

Both glucosamine and chondroitin have been shown to be absorbed with variable levels of efficiency. Larger components such as GAG or collagen itself have a less efficient bioavailability; the larger size of the molecule begins to compromise absorption. This is where specialised delivery mechanisms can improve the functionality of these products.

Injection, direct into the joints, has been a traditional treatment – certainly for acute conditions – and may be the preferred route for pharmaceutical treatment of osteo-arthritis, certainly anti-inflammatories. However, the use of joint products as a nutritional aid, are delivered to support the natural process of maintaining cartilage.

As such oral delivery gives a daily uptake of these nutrients that are absorbed, circulating in both the blood and lymph systems (they can be absorbed as micelles, complexed with oil emulsions), and then diffuse into the chondrocytes. Differences in bioavailability will account for the efficacy of glucosamine and chondroitin.

There are many commercial products that contain glucosamine and chondroitin, as well as other constituents, nutrients and delivery systems. Inclusions of lecitihins, for example in a recently advertised human joint supplement, act as emulsifiers; bile acids naturally produce emulsions of low particle size. The micelle is a complex of fats and water soluble materials, the latter held within the matrix by the polarity of some families of fats (i.e. phospholipids), and the smaller the micelle the easier its passive absorption across the membranes of the gut cell walls. Lecityihns are natural emulsifiers, so help reduce micelle soze.

However, the Oatinol Delivery System (please see article on this web page) is thought to have greater properties. Not only has oat oil been shown to produce very fine micellular size, but the polar lipids of oat and hemp oil will naturally produce compact micelles (Doehlert et al. 2010; Callaway 2004; Kaimainen et al 2102). In particular, hyaluronic acid is extremely absorbable if presented as a nanoparticle, which utilises the efficiency of the ODS.

Glucosamine and chondroitin, singly and in combination, help build and maintain cartilage, whilst acting against its enzymatic degradation and inflammatory cues that may lead to it breakdown. Because of the nature of its synthesis into GAG and collagen it is likely to require supplementation in the cartilage associated with the joints, especially where wear and tear have started the process of inflammation and enzyme degradation. Furthermore, other GAG such as hyaluronic acid and keratin sulphate also show similar properties and, because of the efficiency of the Oatinol Delivery System, such GAG are highly bioavailable (Hyaluronic, for example, up to 100%).

Recently, there have been one or two issues surrounding chondroitin sulphate. Firstly, there have been questions over possible toxicity. Although levels quoted are high (see Knowledge Base – Joint Supplements) it is feasible that over-consumption might cause issues. Secondly, there is the question of responsible sustainability. Highly sulphate chondroitin is obtained from marine sources (squid, or shark), whilst hyaluronic acid is available as a plant-based product. As an ethical question, and as our research review has suggested a direct substitution will maintain the efficacy of our joint supplement, moving from chondroitin to hyaluronic acid must be the correct choice.

As important as these changes are, bioavailability is the third string in ensuring whatever product chosen has an effect. The Oatinol Delivery System is an extremely efficient route for the improvement of passive and facilitated absorption, ensuring hyaluronic acid can play its role.