Leaky gut, known as increased intestinal permeability, is regarded as a separate phenomenon to “Leaky Gut Syndrome”. Although this is perceived as being a difference in definition – in that there is no scientifically recognised syndrome – the condition of IIP can have ramifications. What cannot be claimed is this being a syndrome. It is more correctly, a condition, resulting from a compromised barrier function. Anything else is a result of this. What it means is a range of undigested nutrients, endo- and exo-toxins, pathogens, fermentation and allergenic particles, as well as potentially beneficial bioactives may be able to cross the gut wall, whereas they usually cannot. There are mechanisms to combat the flow and this is encompassed in barrier function.

The role of the gastrointestinal barrier is to provide a physiological, metabolic and immunomodulatory system of controls so potentially harmful components of gut contents are barred from transition, or rapidly denatured, whilst nutrients, dietary precursors and all essential chemicals for metabolism are efficiently absorbed. There are a number of mechanisms to allow nutrients to cross the cells of the intestinal gut lumen, both active and passive, transcellular and paracellular, which can absorb molecules of different size and composition – more details can be seen in Knowledge Base, The Oatinol Delivery System. There are differences along the length of the gut but, in general the process is continuous. But there are two further layers of “protection” that supports the absorptive gut surface: 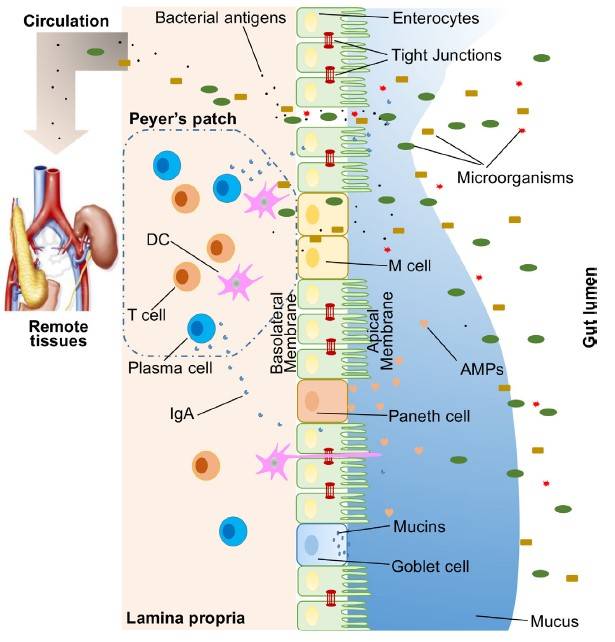 The mucus barrier is a layer of mucilage bound with phospholipids that interfaces with an unstirred water layer, protects the absorptive gut cells from physical damage, whilst allowing diffusion of nutrients. Generated by the goblet cells, mucilage production can vary along the gut length. A thicker, less permeable barrier coats the stomach as an aid to protect against ulceration, while large intestine permeability is less than ileal. The mucilage layer also provides a barrier against microbial adhesion; one of the major risks to gut disorders is the adhesion of pathogens to the gut wall. Supported by secretions from Paneth cells of the gut wall, the mucus barrier also contains antimicrobial chemicals.

The gut wall itself is also a barrier. It consists of enterocytes (the absorptive cells), goblet cells (mucin production), Paneth cells (antimicrobial secretions) & M-cells that are associated with GALT & MALT immune interactions with the Peyer’s Patch and immunomodulation. The absorptive function has been discussed in several Knowledge Base articles; in brief summary, dietary components and bacterial components can cross the gut wall by transcellular or paracellular routes. The trans (through the cells) route has several mechanisms involving both active and passive transport, while the para (between the cells) depends on flow across concentration gradients and interaction with tight junctions. It is the paracellular route that is regarded as the regulator of intestinal permeability and so a function of leaky gut. Implicit in this is the regulation of tight junction. However, unless there is heightened cell death in the gut wall (apoptosis) – due to inflammation, or a breakdown of tight junction function, it is extremely unlikely that bacterial transition is through paracellular routes.

Because several conditions can be ascribed to intestinal permeability, whilst others may be due to transcellular actions & dysfunction (including physical damage), leaky gut cannot be described as a single syndrome, rather a series of events that may result in a range of symptoms.

As described, a central component in the role of leaky gut, tight junctions can be equated to the second line of defence. When the mucus barrier is optimised, microbial, physiological and physical parameters should not impact on the function of tight junctions but, if compromised, opens the junctions to inflammatory and oxidative factors that can affect junction permeability. 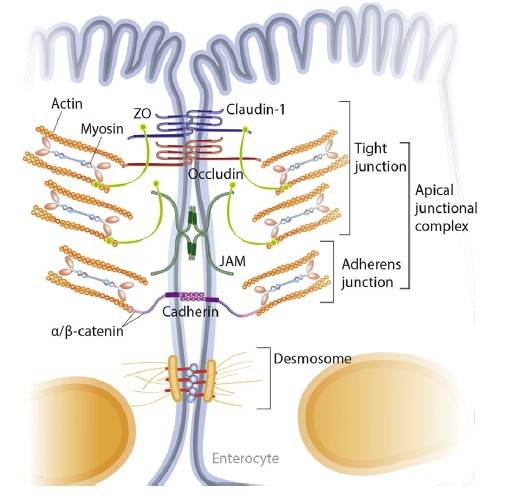 The intercellular junctions of intestinal epithelial cells are composed of several complexes including Tight Junctions (TJ), Adherens Junctions (AJ), and Desmosomes. The AJs and TJs together form the Apical Junctional Complex. TJs are located at the apical end of the epithelial cells and are made up of multiple transmembrane proteins including occludins, claudins and Junctional Adherence Molecules, whose function includes regulatory access to ionic nutrients. Scaffolding proteins such as Zonula Occludens in turn anchor the membrane proteins to the actin cytoskeleton. Non-ionic permeability is regulated at the TJ through actin and myosin contractility. Cell to cell contact at the AJ is mediated by adhesion molecule complexes made up of protein families including the cadherins and catenins. AJs, along with Desmosomes, provide strong connective bonds between epithelial cells. Disruption of these connective proteins, or collateral damage to the enterocytes will lead to loss of function and increased permeability to whatever components that can cross the gut wall, which can activate inflammatory responses, subsequent oxidative damage and lead to further permeability: 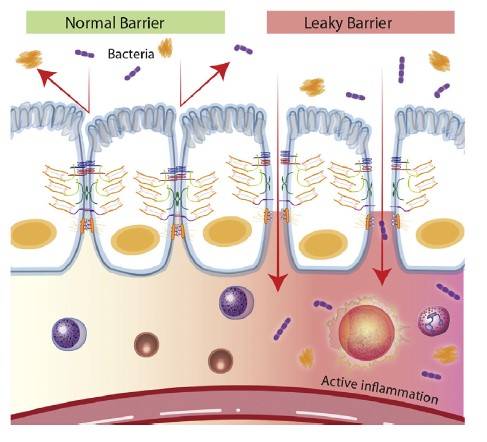 Setting aside normal pathogen defence mechanisms, which are not attributable to Leaky Gut, there are several factors that can impact permeability.

As leaky gut is a composite of different functions, resulting conditions depend on what is absorbed. As such it is difficult to predict subsequent effect. However, certain conditions have been related to leaky gut. These include autoimmune function, chronic fatigue syndrome, dermatitis and psoriasis.

Autoimmune function, including diabetes and lupus is believed to be dependant on both environmental and microbiome factors. Dysfunction of the gut wall will allow specific antigens that cause the body to turn against its own functions. In the case of diabetes there is a reaction against the pancreatic cells that secrete insulin. Similar in response to allergens, flooding of the immune system causes an over-reaction to the stimuli, which results in these reactions. It is likely that this also leads to psoriasis and dermatitis, and many other immune dysfunctions. However, it is still unclear whether microbial toxin invasion through M-Cell route is leaky gut, or maybe an underlying factor.

While it is unclear what parameters, and subsequent symptoms, are truly dependant on leaky gut there are three major areas where supplemental nutrition can make a difference; reinforcing the barrier, optimising the microbiome and maintaining the Tight Junctions.

Both the mucus layer and the gut wall itself suffers physical stress; passage of food results in wear and tear and constant regeneration of the gut cells is necessary. Adequate protein and lipids, as well as specifics, such as glutamic acid – which helps stimulate protein generation - optimise gut wall integrity, whilst specific nutrients can help reinforce the mucus layer. Pectins, soluble fibre components, can be incorporated into the gastric mucus layer, whilst they can also stimulate intestinal release. Dietary phospholipids are also beneficial; providing components of the two layers are a basal requirement to help support normal physical parameters. Bioactives, such as curcumin, has also been shown to increase the gastric mucus level; its antioxidative property interacts with prostaglandin production that helps reduce ulcerogenic agents in the duodenum.

Optimising the microbiome is also important. An optimal microbiome not only prevents pathogen adhesion to the gut barrier, where it has the potential to infect, but provides a range of fermentative end products that can affect tight junction function. Lactic acid is commonly produced from the fermentation of starch, and is significant in that it increases Tight Junction spaces, and potential leak. In an optimal biome, lactic acid utilising bacteria will convert it, reducing the damage. At the same time, increasing the generation of butyric acid will energise the enterocytes and tighten the junctions, reducing leak. The use of prebiotics is one way to maintain the correct biome; selected oligosaccharides can stimulate the growth of some fibre utilising bacteria, and this will generate good levels of butyrate. Soluble fibre has been shown to have prebiotic effect so dietary components can help. At the same time, one prebiotic – β-glucans can also act as an immunomodulator and help reduce inflammatory cues that may impact on the junctions. Again, bioactives may also have an effect on the biome; so dietary and supplemental ingredients can have a positive effect in barrier function.

Maintaining Tight Junction is integral with microbiome optimisation and therefore prebiotics can help; β-glucans being a case in point (Knowledge Base - Beta Glucans - What do they do?). The other route is to help support anti-inflammatory process that can reduce the cytokines that disrupt the mechanisms regulating the junctions. The use of bioactives, such as curcumin, are an example of this.

Finally, products that can bind toxins, although not directly causing leak – although could capitalise on it – are a useful addition to a dietary regime. These parameters, and those that help support the gut based immune system – which in itself is the third leg of leaky gut – are useful in helping to stabilise leaky gut. These parameters that are present in Digestive Aid & Immune Aid.