It is known that the mechanism of absorption of minerals and trace elements, both as cations (+ve) and anions (-ve), is by an assisted transcellular route, involving specific and non-specific metal transporter proteins, as well as specific secondary transporters, such as transferrin or albumin. Divalent transporters tend to be unspecific, and it may be that this route highlights where competition between minerals affects absorption. Equally, there is synergism between other minerals, reductase enzymes to alter the ionic status of the mineral and active transport systems involving the creation of glucose of amino acid complexes.

However, there are other routes of absorption, both in terms of where, and how. Although the majority of mineral/t.e. absorption occurs in the small intestine, significant amounts can be absorbed across the rumen/forward fermentation chambers, smaller amounts in the large intestine.

Other mechanisms of absorption are also present through a paracellular route. There are two such mechanisms, paracellular transport and solvent drag (fig 1). 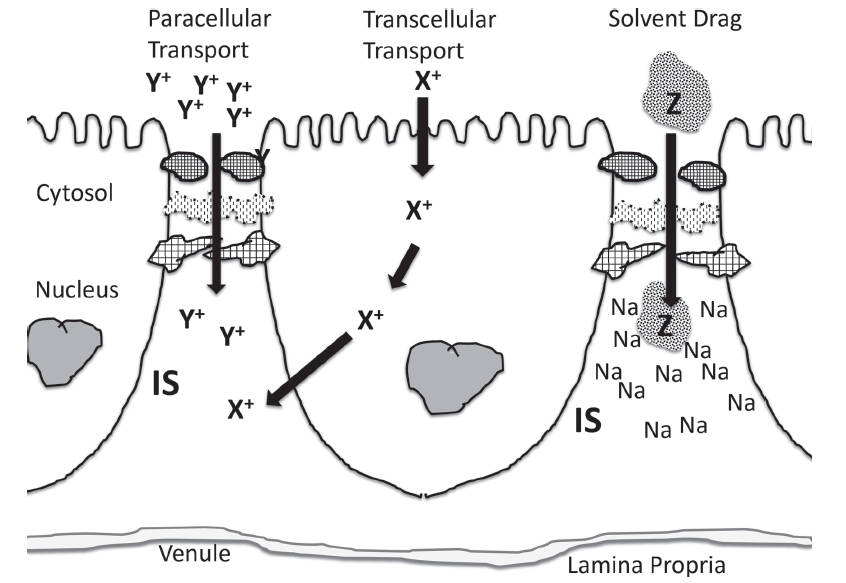 Figure 1. Mineral transport across gut epithelia. X+ and Y+ are cations, Z is a dissolved salt. IS are interstitial spaces.

Whilst transcellular transport depends on transporter proteins to move minerals from the cell surface to secondary transport mechanisms, paracellular transport uses characteristics of the tight spaces between enterocytes. Holding the enterocytes together are two types of proteins, claudins and occludens, and the former appears to regulate cation flow. These create an electrochemical gradient which pulls cations down into the interstitial space. Conversely, any mineral source – salts, chelates etc. – if soluble in the water layer over the tight junctions, can pass into the interstitial cells by solvent drag – a form of osmosis. However, depending on mineral concentration, flow can be in either direction.

At first sight, it would appear that there is an obvious route for different forms of minerals. All salts should be able to cross via the solvent drag route, but it would appear to be the only route for soluble chelates. Similarly, for dissociated salts the electrochemical gradient appeals. However, as tight junctions account for only 0.1% of the surface area it would seem unlikely to impact on availability. In fact, the actual contribution by different routes varies widely. Calcium absorption, for example, is thought to be 50% paracellular in non-ruminants, although the actual figure for ruminants is unknown. By contrast, copper is almost totally absorbed by the transcellular route, as the potential difference across the tight junctions is too highly positively charged to allow flow, and copper concentration in the diet is low and detrimental to solvent drag.

Another major factor affecting mineral uptake, is the effect of passing through the fore stomachs of ruminants and camelids. Whereas the acid of a monogastric will tend to dissociate salts and chelates, releasing the ionic form, the rumen – or first chamber of a camelid, will have different properties. Any free ions released in the rumen enter a dynamic system and can form any number of complexes with fibre, microbial protein, other ionic complexes etc., with a resultant decline in solubility. As all subsequent mineral & trace element absorption depends on them being able to dissociate in water, either as ions or covalent products, loss of solubility will result in loss of absorption. It is due to this that the use of chelates and hydroxy minerals were first marketed. Hydroxy minerals, such as zinc chloride hydroxide monohydrate or dicopper chloride trihydroxide are covalently bonded metals, linked by a hydroxy ligand. They do not dissociate in the pH range of the rumen and so maintain their bioavailability. Similarly, mineral chelates, such as zinc methionine, have low solubility in rumen-like conditions, but less so than hydroxy metals. As a point of information copper oxide is totally insoluble in the rumen, and so sources within mineral compounds has significant effect.

Further to this is the absorption within the rumen itself. The rumen, omasum and abomasum consist of layers of enterocytes, which build up from the stratum basale (fig. 2) 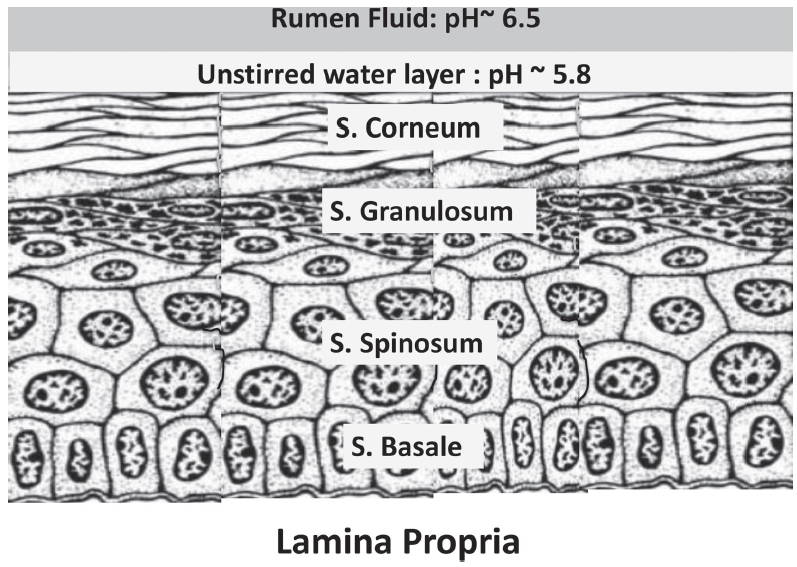 Although consisting of interlocking layers there are tight junctions that provide an effective barrier to absorption. But there are also gap junctions, allowing free flow of volatile fatty acids (VFA) and mineral ions. Although there are pressures reducing the availability of minerals by reducing overall solubility, there will be some absorption. Increasing the concentration of a mineral will improve solvent drag, but high levels of inorganic salts can depress fibre digestibility; as fibre/trace element complexes reduce the solubility of the mineral, at the same time they depress the fermentability of the fibre and so affect feed value. Using combinations of mineral salts and chelates or hydroxy minerals has been shown to give optimal bioavailability.

Using a combination of mineral salts and complexed minerals will utilise both transcellular and paracellular routes, solvent drag in the rumen/first chamber. It will avoid having too high dietary levels, which are responsible for reduction of feed efficiency and the potential for absorption conflict with other trace elements. For fibre-based diets supplying trace elements as hydroxy minerals ensures optimal rumen function, although some salts should be included for microbial needs and utilising gap junctions. In this way, base amounts can be added as salts, with additional levels as the hydroxy mineral for specific function, such as hair growth.