O’Brien and Jackson (2012) reviewed 25(OH)D and its mechanism in immunity, both in innate and adaptive immunity.

The diagrams below summarise these actions: 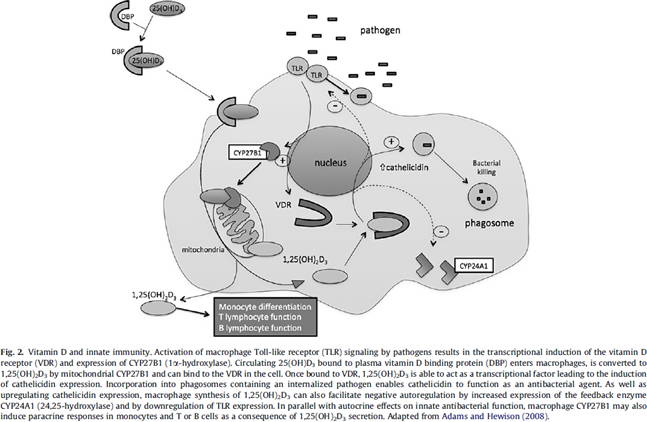 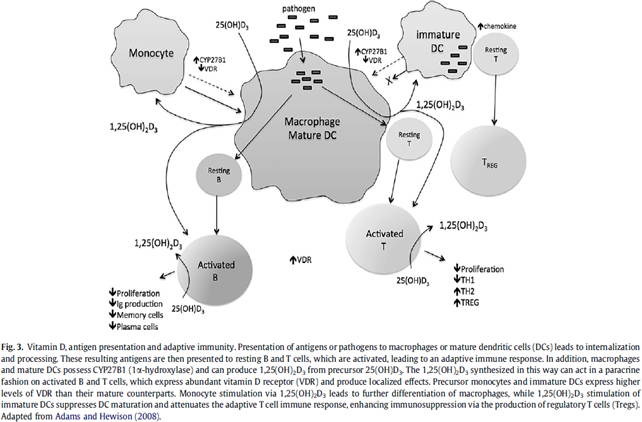 Vitamin D3, cholecalciferol, is hydroxylated in the liver to Calcidiol – 25(OH)D, and it is this form that is bound with D Binding Protein (DBP). The activated DBP can bind to Vitamin D Receptors (VDR), which are present in the nuclei and plasma of all cells. Binding to the genome – DNA material – is the pathway of calcium homeostasis and cytokine production, whilst intracellular sites involve immunomodulatory and other physiological functions, such as hypertension and diabetes. It is thought that this partition of routes explains the discrepancy of recommendations between deficiency and sufficiency, and actual dietary levels of cholecalciferol to impact on immunity are difficult to assess.

The immunological route, as described involves the activation of phagosomes and macrophage cells, and Ig and B amd T cell production through its degradation to 1,25(OD) – calcitriol. Also involved is the release of cytokines, and pro-inflammatory suppressants.

This mode has been concerned with humans and it is not known to what extent these mechanisms are common to other species. There are areas of commonality; in dogs, for example, calcitriol has been shown to be a potent tumour suppressant, although hypocalcaemia can also occur. Similarly, inflammatory bowel diseases in humans and dogs are similar and vitamin D has been shown to ameliorate the condition. However, unlike humans, and other species such as horse, sheep and alpaca, dogs (and cats) ability to synthesise vitamin D is functionally inadequate and so must obtain all its vitamin D from the diet.

In terms of vitamin D deficient rickets, sheep and alpacas appear particularly susceptible; dogs and cats are relatively immune; and the plasma levels of 25(OH) and 1,25(OH) in horses are below those that would induce rickets in other species. In other words, there is insufficient knowledge currently, to extrapolate the human model over to other species and dietary recommendations are also difficult.

There is a limited amount of information on the impact of dietary supplements. In pigs, feeding 3,500IU/kg gave higher cellular immune characteristics then feeding 1,500 IU/kg and this correlated with ~ 40ng/ml and ~10ng/ml plasma levels respectively. This is roughly 100-25 nmol/l and approximates to data in wild boar and deer in impacting on TB of those populations.

This being the case, and the values of the previous paper being valid, then the original levels should help impart an immunological response.