There is much confusion over the definitions, functions and modes of action of both pro- and pre- biotics. Ultimately, they play a role in adjusting, or maintaining, the natural microbial populations in gastrointestinal tract; this may have implications on gut health, nutrient availability and digestion and the immunological status of the host animal. Although probiotics and prebiotics are markedly different products, the end results of their activities can be the same.

Probiotics are live microorganisms that, on ingestion, effect a modification of the existing microbial population and gut physiology.

Prebiotics are non-digestible feed components; generally but not exclusively oligosaccharides (short lengths of functional fibre) that support certain microbial populations that effect a modification of populations and gut physiology.

In terms of European feed Safety Law, probiotics are registered as gut flora stabilisers; there are only a limited number of individual species, some specific to individual animal species, that are registered. Generally, the EU does not recognise probiotic as a technical function due to the lack of evidence. However, this is mainly based on claims made for live yoghurts and bears little similarity to animal nutrition. Licensed products include Saccharomyces cerevisiae – a yeast – Enterococcus faecium (cats & dogs), and a number of lactic acid producing bacteria for chickens and young livestock. This is because lactic acid helps maintain an acidic environment in the small intestine, optimal for enzymic digestion of protein and starch, as well as providing a nutrient base (potentially a prebiotic) for beneficial small intestine bacteria. However, for companion animals (cats, dogs, horse) the role of probiotics is mainly targeted in the hind gut to aid fibre fermentation, although there is a potential for the impact on immune responses in all species.

There are a number of mechanisms for probiotic modes of action which include modulation of the host immune system, production of antimicrobial substances, inhibition or inactivation of bacterial toxins, displacement of pathogenic microorganisms (competitive exclusion), improvement in micronutrient absorption, and improvement in epithelial barrier function. The majority of research has been carried out on humans and laboratory animals, in vitro (laboratory trials in a simulated environment) and there is a debate on the efficacy of ingested microbiotica – mainly associated with their potential to survive the transit of the gut. That being said, it is likely that mechanisms across species will be similar and so act in the same way across companion animals.

The local intestinal and general immune system, including innate and adaptive responses are influenced by probiotics. Conserved recognition receptors of the intestinal epithelial cells (IECs) and gut-associated immune cells (Peyers Patches, gut and mucos associated lymphatic tissue – GALT & MALT) recognize probiotics, and their metabolites, process them and evoke a signalling cascade. The effects include maintenance and fortification of the intestinal barrier, production of mucus, and survival and growth of IECs. This results in a stronger mucosal barrier against invading pathogens. In addition, it involves the maintenance of tight junctions. Both directly and indirectly (for example, probiotic fermentation producing butyric acid which tightens these junctions), this helps control dendrite stimulation, immunoglobulin A (IgA) release and access to the lymph system, all aspects of the defence mechanisms.

Furthermore, GALT react to probiotic strains by responding to antigenic material and induce the differentiation of B cells into plasma cells. As a result, IgA, which is important for mucosal immunity, is released into the intestinal lumen by plasma cells. The IgA and b-defensin, produced and released by IECs, result in suppression of growth of pathogens as well as systemic and local anti-inflammatory effects.

Probiotics also modify the cytokine production by IECs and cells of the innate immune system, such as macrophages and dendritic cells, and therefore show an anti-inflammatory effect. Systemically, probiotics can influence immunoglobulin production through antigen/antibody responses. 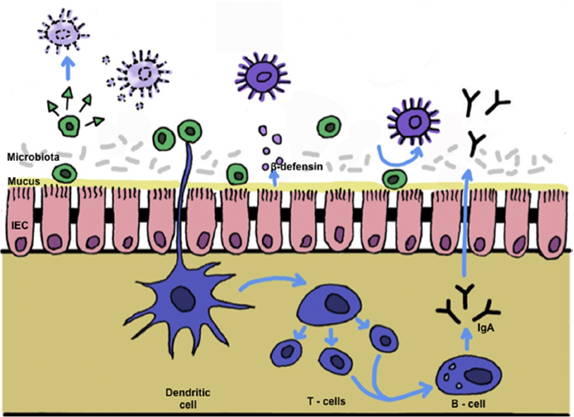 Some probiotic strains produce antimicrobial metabolites in large quantities. These include fatty acids, lactic acid, and acetic acid. Not only can these substances be antimicrobial, they can also support acidophilic species such as lactobacilli; as such they are acting in a prebiotic manner. Other antimicrobial substances, such as formic acids, free fatty acids, ammonia, hydrogen peroxide, diacetyl, bacteriolytic enzymes, bacteriocins, antibiotics, and several undefined substances, are produced in much smaller amounts.

Competitive exclusion refers to the ability of probiotic strains to decrease pathogens present in the intestinal lumen and their capacity to adhere to epithelial cells. Probiotic strains adhere to epithelial cells, block receptors and increase mucin production. Subsequently pathogens can no longer adhere or gain entrance into epithelial cells. Additionally, probiotic strains occupy ecological niches and compete for nutrients, thus making it more difficult for pathogenic bacteria to survive in the gastrointestinal lumen. Toxins are important and well-described virulence factors for enteropathogenic bacteria. Probiotics have been shown to inactivate toxins, reduce toxin production, and sometimes neutralise enteropathogens. The antitoxin effect of some probiotics may be beneficial in positively managing infectious diarrhoea (Schoster, 2018).

Referring back to the “prebiotic” effect of probiotics: Some microbial strains will utilise nutrients to produce short chain fatty acids – such as lactic acid and the volatile fatty acids (VFA). Although the VFA butyric acid has been shown to help in the maintenance of tight spaces, nutrients such as lactic acid can be fermented by inherent populations and this will affect numbers. However, lactic acid utilising bacteria tend not grown in the hindgut of horses which would result in a lactic acid increase; this is contrary to current thinking where increasing hindgut levels of lactic acid degrade tight spaces and allow large molecules, including endotoxins, to be absorbed. It raises the question of suitability of probiotics; those quoted as being active in yoghurts for human nutrition (mainly bacteria that actually ferment lactose into lactic acid) are unsuitable for equines and fibre fermenters – camelids and ruminants – as well as obligate carnivores – cats – but can be effective for dogs. Trial work has shown that cocktails of lactobacillus species can have positive effects on stool characteristics, reduces bacteria associated with diarrhoea (such as Cl. perfringens and Entero. faecium) – Gomes-Gallegos et al., 2016. However, other lactobacilli species, used as probiotics, have failed to show an impact on hindgut microbiotica or the stimulation of gut or serum release of immunoglobulins A & E (Vilson et al., 2018). Likewise, Saccharomyces spps. have been shown to have exclusion effects on E. coli and faecal enterococci, again signifying anti-diarrhoea potential. In addition, S. cerevisiae has been shown to improve nutrient digestibility and growth in puppies (Stercova et al., 2016).

Despite the paucity of direct information and, as with any research led topic, conflicting evidence presenting itself, there is increasing data on the positive effects of probiotics. Whether it is due to improvement of the health status of the animal, improved nutrient availability or gut physiology, probiotics are extensively used. There is some discussion on the preferred product to use. Within the restriction of those microbes that are recorded in the EU register of feed additives 1831/2003, there are limitations to acidophilic bacteria and a yeast. Bearing in mind hindgut function of probiotics to improve faecal consistency (dogs) and fibre fermentation (horses) a live culture that can survive transit through the stomach and small intestine is essential. To that end a yeast product – Saccharomyces cerevisiae – appears more likely to survive. An initial defence mechanism against pathogen invasion is the presence, in saliva, of lysozyme. Lysozyme has antimicrobial properties that disrupts peptidoglycan, a major component of gram positive bacteria. Those bacteria associated with probiotics are gram positive and so may well be impacted by ingestion.

Based on the information available, GWF Nutrition use Saccharomyces cerevisiae as a gut flora stabiliser. However, there is evidence that it also helps maintain the immune system, microbial populations and improves nutrient digestibility. In terms of the latter, yeast cell wall material has been shown to have nutrient enhancement capability – the attenuated strain of S. cerevisiae is also marketed as a prebiotic.